I’ve been on holiday! And while on holiday without wifi I managed to catch up on some reading – and found a new author in the process. Kate Riordan. 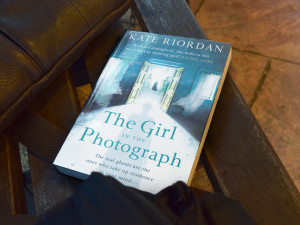 I must mention that the book is published in the UK under ‘The Girl in the Photograph’ and in the US and Canada as ‘Fiercombe Manor’.

I’m not usually a fan of books that flip between two different time periods, even though these two were only 1932 and 1898, but when I ‘looked inside’ on Amazon I was immediately hooked by the first couple of lines – in a Prologue no less. So much for those who declare prologues to be essentially evil. Beautifully written prose:

“Fiercombe is a place of secrets. They fret among the uppermost branches of the beech trees and brood at the cold bottom of the stream that cleaves the valley in two.”

I adore writing like this, always have. Some might say, ” How can secrets fret?”, but I’m not one of those, and anyway, by the end of the novel you understand. So I downloaded and settled in to enjoy, and was not disappointed.

I’m not going to write a summary of the novel, you can read that on Amazon, but I will say that I think the way the lives of Alice and Elizabeth are told and interwoven is beautiful. I loved the parallels drawn between the two women and found I identified a great deal with Elizabeth, who Alice gets to know through a diary and smidgens of information dropped by the housekeeper, Mrs Jelphs. I understood Elizabeth, and why she did what she did at the end.

And, another thing – I never felt annoyed when the author switched to the other woman. There are times when, in some books I have read, that the switch between pov’s or time periods has irritated me. Yes, there is such a thing as tension and keeping the reader guessing, but there’s also telling a story and using the natural curiosity of the reader to lead them into the next point of view. I thought Ms Riordan did that wonderfully.

The only thing I wanted to understand better was why Tom Stanton was attracted to Alice, but it’s quite possible I missed something in my haste to find out what happened.