Finding the Start to your Story

Finding the beginning to a story can be like trying to find anything in a large handbag (purse, for readers in the US:D). Nigh on impossible. I have a large, pink leather bag which I love, but can never find anything in, and I can often be found at the checkout in shops looking utterly panicked as I frantically search for my wallet.

I am just as hopeless at finding the beginning of my stories. With my current novel I began at what I thought was the inciting incident, only to discover that I was writing lots of flashbacks – and even one flashback within a flashback. At that point I rested my hands from the keys and wondered if I had started in the right place.

Now, I quite liked the idea of keeping the flashback within the flashback, and persisted stubbornly until I realised that I had started the novel half way through and I needed to find the beginning.

So I opened a new page and began at where I thought the new beginning was. Lo and behold, it wasn’t there. I was wrong. Again. I had to travel further back in time. 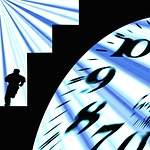 In the last few days I have finally realised where this novel begins, and I feel good about this beginning. Know why? It starts at the beginning!

It might sound obvious to start at the beginning but it’s not always easy to know where that is. You might think you have your inciting incident. However, is that inciting incident you’re writing the original one, or one in a long stream of incidents incited by an action?

The key is not to over-think it. A blank page can stare back at you, intimidating in its purity, demanding perfect prose and complex characters. You want that first sentence to be the best you have written so far, you want it to set you on a path to the perfect novel. Except, we all know that most of the time that first sentence will be re-written at least a thousand times, erased a few hundred times and then, if you’re like me, that first sentence won’t actually turn out to be the first sentence after all.

If you don’t know where your beginning is, don’t worry. Instead, think about what’s going through your head. A scene? A fragment of dialogue? Do you have a picture that needs describing? Start there, and see where it leads. Who cares if it’s not the beginning? Very often it’s not until we get to the end that we know how the novel must begin anyway.